Until I became the author of a book myself, I hadn’t realised how important reviews are to writers. Without a good number of reviews and ratings, books disappear into the ocean of titles on Amazon and other sites, never to be seen again. So now I try to review as many of the books.as I can, especially those by less well known authors.

Peter Fitzsimons is by no means an unknown author. But I enjoyed his book Burke & Wills: the triumph and tragedy of Australia’s most famous explorers so much that I left a review on Goodreads anyway. Here it is:

In an age of satellite communications, GPS, drones and hi-tech camping gear, it’s hard to imagine what it must have been like to set off across unmapped Australia with none of those aids. Not that Burke and Wills, and the dozens of people who originally made up their expedition team, set off 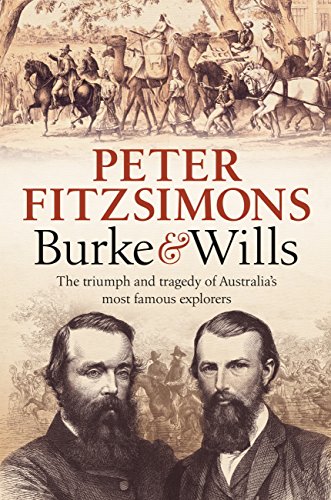 with nothing. Far from it.  They were equipped by a committee, and had literally tons of equipment. Tragically, what Robert O’Hara Burke lacked was the leadership skills and bushman’s knowledge required to get him and his party safely to the Gulf of Carpentaria and back.

Peter FitzSimons’ book does a great job of showing that it wasn’t just bad luck that left Burke and Wills stranded and starving to death at Coopers Creek. He follows the whole sorry process, from the first suggestion of an expedition, to the final fabulous funeral in Melbourne in honour of Burke and Wills.

He spares no-one, and omits no-one. The Indian and Afghan sepoys brought in to look after the camels, and the Aboriginal residents of the land Burke’s party were crossing, are included as real and influential characters, not just adjuncts to the European explorers.

Fitzsimons writes in a chatty, rather irreverent style,  and all in the present tense, which adds to the drama. The book, despite it’s tragic subject, is entertaining as well as informative. I thoroughly enjoyed it.

Keep up to date with what I’m writing by joining my Readers List.

As a subscriber you’ll receive a monthly newsletter, ‘The Scribbler’, straight into your email inbox. The Scribbler includes interesting articles not published anywhere else, useful tips and hints, and news about what I’m writing. You can read a sample here. I’ll also send you a link to download a free information sheet, ‘Eight online resources for history lovers’.

What was life like, in the nineteenth century, for a convict's daughter? A foot-soldier's wife? Susan tells the true story of Susan Whybrew, nee Mason, and her Irish-Australian family. It's available in paperback and a variety of ebook formats.

Or many other ebook stores (kobo, ibooks, nook, Scribd)

This website uses cookies to improve your experience while you navigate through the website. Out of these, the cookies that are categorized as necessary are stored on your browser as they are essential for the working of basic functionalities of the website. We also use third-party cookies that help us analyze and understand how you use this website. These cookies will be stored in your browser only with your consent. You also have the option to opt-out of these cookies. But opting out of some of these cookies may affect your browsing experience.
Necessary Always Enabled

Any cookies that may not be particularly necessary for the website to function and is used specifically to collect user personal data via analytics, ads, other embedded contents are termed as non-necessary cookies. It is mandatory to procure user consent prior to running these cookies on your website.